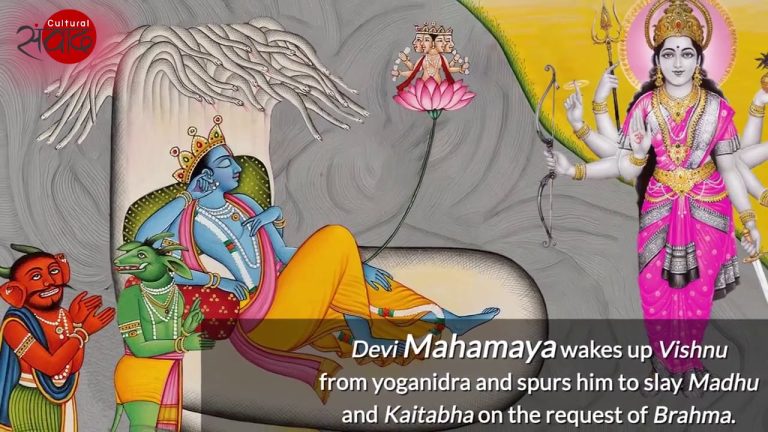 The first episode reveals the power of tamas, the power of delusion, how in ordinary state of being, humans are all deluded.

The first episode reveals The Primordial Mother Adi Sakti or Moola Prakrti in Her Dark, Deluding aspect (Tamas) that Ensnares humankind through the psychological afflictions of ignorance and attachment, through the influence of tamas and rajas. It teaches about the nature of reality at the most basic primordial level. Maha Vishnu has to awaken from the state of primal sleep in order overcome the original demoniacal forces, Madhu (tamas) and Kaitabha (rajas). This is possible only through Maha Maya’s grace, only if She Frees Vishnu from the influence of Yoga Maya, The Primordial Inactive State Predominated By Cosmic Tamas.

There are two ways to understand Madhu and Kaitabha.

One is suggested by the Mahabharata’s version of the same myth where it is stated that the asura Madhu is of tamas while Kaitabha is of rajas.

The Harivamsha version too suggests a similar interpretation by having the two asuras themselves declare, “By us is all this covered over with tamas and rajas. Thus Madhu and Kaitabha are the two original demoniacal forces of tamas and rajas. They try to overcome the creative and sattvic force (Brahma).

All the three gunas are born simultaneously before the very beginning of a Kalpa. In fact the word ‘kalpa’ is the same as in the other related word ‘sankalpa’ that is suggestive of ‘will’ or ‘resolve’. A Kalpa happens by The Resolve or Will of The Supreme Being. A Kalpa is one of the many continuous cycles of creative manifestation, sustenance and dissolution that happen by the sankalpa (will or resolve) of the Supreme Being, Who in some creation myths is equated with Lord Vishnu. Madhu-Kaitabha emerge from the mala (dirt or waste) from Vishnu’s Ears. The Ears are symbolic of sound or Sabda which is another name for Nada that marks the start of cosmogenesis.

The three gunas are part of the same cosmic process of manifestation. Ever since creative manifestation starts the three gunas are in a state of disequilibrium, wherein they struggle towards ascendancy. The three gunas are part of the same veiling power of Prakrti or Maha Maya. Together they form the three strands that bind us to ignorance. However, over a period of time Sattva is like a burnt rope because by its very nature it brings knowledge. That is why initially the ascendancy of Sattva is preferred over tamas and rajas. A burnt rope or a rope that will sooner or later be burnt cannot bind us for long. But till it is fully burnt even this rope can be binding. On the other hand the ascendancy of tamas and rajas are undesirable at all stages. As per classical Ayurvedic theory tamas and rajas are in fact manasika doshas that can act as psychological afflictions. They can potentially spoil (dosha: that which can darken or spoil) the psyche by leading to many other psychological afflictions. That is why The Supreme Being (Lord Vishnu) has to Save sattva (Brahma) by subduing tamas (Madhu) and rajas (Kaitabha). But this is possible only through Maha Maya’s Grace, only if She Frees Vishnu from the influence of Yoga Maya, The Primordial inactive State predominated by cosmic Tamas.

The other approach to understanding Madhu and Kaitabha is etymological. Madhu denotes something sweet. Madhu is in fact the actual word for honey while Kaitabha denotes an insect. Thus, Madhu and Kaitabha are honey and the honey-bee. This world and its fruits are an extension of The Divine Mother’s very Own Manifestation. In a way She Is not separate from the world that is Created By Her Own Self.

But if one hankers after the fruits of the world without being able to see Her behind this world or its fruits, sooner or later the inevitable result of this obsession with gathering honey is pain. Honey and the sting of the bee are inseparable. If you want honey you should dare the inevitable sting of the insect. Humans are all busily engaged in collecting one more drop of honey convinced that this is the purpose of human lives. The more honey one collects, the more the stings on one’s swollen face. But humans endure the pain of the sting preparing for the next drop of honey. It is the ignorance that keeps one busily engaged in this perpetual cycle of gathering more honey, daring more stings.

This simple insight can be the start of the loosening of the grip of the world over the Self. It is so simple yet immensely powerful, the Power of Maha Maya. One needs discernment (viveka) and dispassion (vairagya) to see through this Beautiful Play of Maha Maya. And that happens only Through Divine Grace, or through great merit in many lives, or through the grace of a Sadguru.

Suratha the king and Samadhi the merchant find a Sadguru in the sage Medhas who can lead them to this insight by revealing the glory of Maha Maya to them. Understanding the true nature of this world is important to be able to see the Supreme Being behind this manifest world. Otherwise the world can be a source of much misery and pain through its lure of honey and the inevitable pain of the sting. That is why the wise sage Medhas preferred to narrate the Madhu-Kaitabha myth to the king and the merchant when they seek his counsel since their predicament is surely related to the lure of the things of this world and the inevitable pain that they have experienced from it.

On the Esoteric Interpretations

The esoteric interpretation is not an afterthought as some might think after seeing varying interpretations by enthusiastic writers.

The esoteric interpretation is inherent to the myth as will be evident when one examines the myth through various approaches.

In fact multiple approaches lead to the same interpretation.

Etymological examination of the words used, cross-scriptural references, oral teaching from the Gurus, various commentaries and finally the inner experiences that a practitioner goes through, all these provide more authority to the esoteric interpretations.

Interestingly all these approaches are in harmony and point to a nearly precise esoteric meaning of The Devi Mahatmyam.

Some writers have interpreted the demons and other allegories arbitrarily. But as affirmed here the interpretation cannot be loose or arbitrary and has to harmonise all the five approaches delineated above.

It is not enough if an allegory makes spiritual or psychological sense if it is not etymologically in line. Nirukta too must agree. This is the approach used consistently for right interpretations. For instance if one examines the esoteric interpretation of Madhu-Kaitabha, Honey is sweet and heavy and any sweet in less quantity is sattvic, but in excess it is tamasic and thereby dangerous. Madhu is thus potentially tamasic. The insect (Kaitabha) is famous for its busyness – “Busy as a bee” is a common expression. Busyness is inherent to rajas. Thus, Kaitabha is rajas.

As one can see, the etymological interpretation is in line with the cross-scriptural references from the Mahabharata that clearly equate Madhu and Kaitabha with tamas and rajas.

Of course the psycho-spiritual interpretation too fits very well with the creation myth of Madhu-Kaitabha and Brahma.