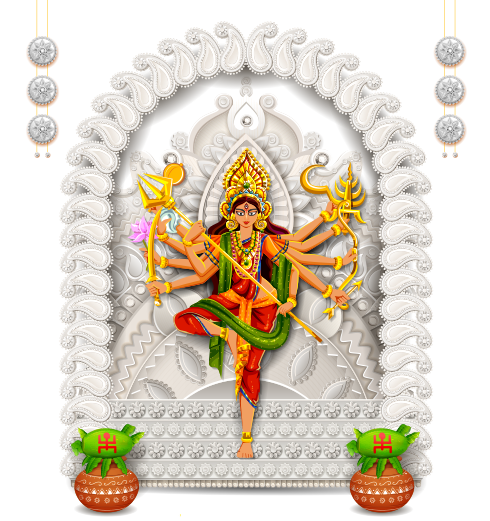 The Digital Temple helps to learn more about The Divine Mother through the Texts of The Devi Mahatmya and more.

About "The Devi Mahatmya" (also known as "Durga Saptashati" and "Chandi")

Whilst Its stories can be taken as metaphors relating to our own psycho-spiritual landscape as well the challenges we face in life, there isn’t a single approach to The Devi Mahatmyam or the Chandi. The various hymns to The Goddess in The Devi Mahatmyam inspire us to devotion for The Personal Forms of God as Mother while “its deeper, philosophical and esoteric interpretation leads us to the realization of God as the impersonal supreme reality”.

“The Devi Mahatmya” as MAHAMANTRA

Though the Devi Mahatmyam constitutes chapters 81-93 in the Markandeya Purana, it is not merely treated as a part of a purana. Unlike the Purana that has the status of being an auxiliary limb (upanga) of the Veda, Devi Mahatmyam has attained the status of sruti, the very status accorded to the Veda. It has an intrinsic independent status by itself. It does not derive its significance from its Puranic background. It is a full-fledged scripture by itself. On one hand it is like a synthesis of many myths from many sources, skillfully integrated into a single narrative and thus incorporates the best of the puranic approach.

Part narrative and part hymn, The Devi Mahatmyam combines the strengths of both the oral and written traditions. On the other hand, it also displays the bardic style of the vedic approach, that combines the best of preliterate and literate strengths of expression, in so far as the hymns are concerned.

The Katyayani tantra considers each verse of The Devi Mahatmyam as A Mantra. Others consider everywordofTheTextisAMantra.

The whole text is treated like One Maha Mantra. Though three-fourths of the scripture deals with description of battles and their associated narratives, even these contents are considered to be mantras.

The actual number of verses in the text is only 518, not 700 as stated by some modern writers. The number 700 is thus not related to the number of verses, but indicates the total number of mantras in the Devi Mahatmyam. There are 537 sloka mantras (full slokas), 38 ardha-sloka mantras (half slokas), 66 khanda mantras (part of a sloka), 57 uvacha mantras and 2 punarukta mantras, thus totalling 700 altogether. The details of the break-up of the mantras are important for for Chandi Homa, Japa and Archana. Apart from these 700 mantras, there are other covert mantras within the text. At times mantras are encoded into the narrative.

Exploring the encoded mantras is possible only through an exclusive commentary written with the aim of exploring The Devi Mahatmyam as A Great Mantramaya Text.

Sixteen centuries after its composition, The Devī Māhātmya still shines as a beacon from a primordial age when men and women, enchanted by nature’s beauty and abundance, yet terrified by its fierce, destructive power, honored The Source of Creation as The Great Mother.

Devi Mahatmya enshrines many an ancient memory in the resounding cadences of its verses and continues to sing Her Glory.

At the same time, as the last open expressions of Goddess-centered religion were vanishing from the Western world, The Devī Māhātmya took shape on the more tolerant soil of India, where the religion of The Divine Mother flourished and continues to flourish.

Even today, The Great Hymn of praise that is The Devī Māhātmya reveals an all-embracing vision of harmony between The Mahā Devi’s Abiding Earthly Presence and the transcendental unity as proclaimed by Sanatana traditions’ seers. 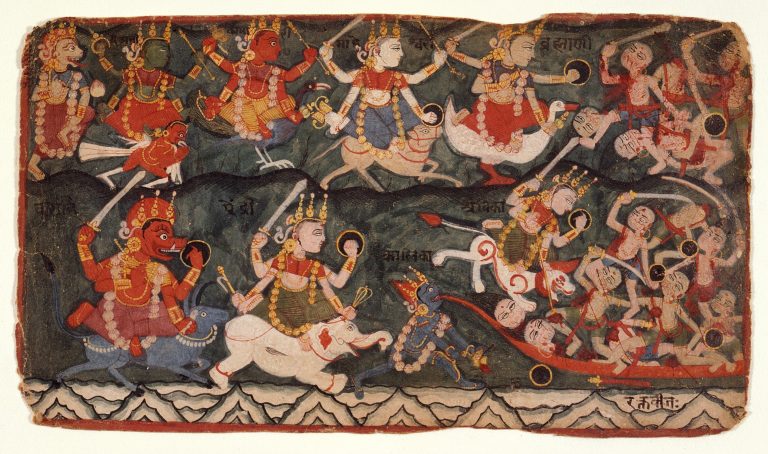