Chapter 13: The Granting of Boons to Suratha and the Merchant 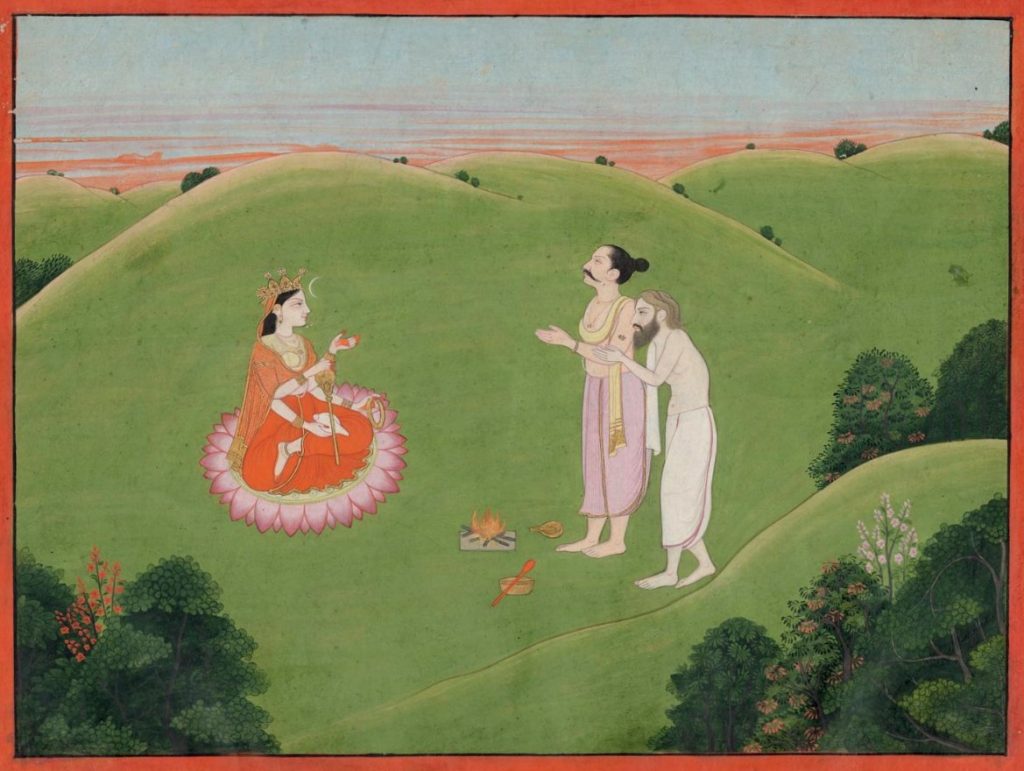 READ INTERPRETATION of this Chapter

13.2 “Thus have I related to you, O king, this supreme glorification of the Devī:

13.3 Such is the splendor of the Devī, by whom the world is upheld, and such is the knowledge fashioned by the blessed Viṣṇumāyā.

13.4 By Her are you and this merchant and other thoughtful people deluded, just as others have been and will be deluded.

13.5 O great king, take refuge in Her, the Supreme Sovereign. When worshiped, She truly confers enjoyment, heaven, and final liberation on humanity.”

13.7 Hearing his words, Suratha the king bowed in reverence to the illustrious seer of steadfast austerities.

13.8 Despondent over excessive attachment and the loss of his kingdom, he went at once to practice austerities, O great sage, and so did the merchant,

13.9 that they might obtain a vision of the Mother. The king and the merchant settled on a riverbank and engaged in spiritual practice, chanting the supreme hymn to the Devī.

13.10 When they had fashioned an earthen image Of Her on the riverbank, the two of them worshiped The Devī with flowers, incense, fire, and libations of water.

13.11 Now fasting, now restraining their senses, with minds constant in concentration, they made offerings sprinkled with the blood of their own bodies.

13.12 When they had worshiped Her in this way with self- restraint for three years, Caṇḍikā, The Support Of The Universe, Was Well Pleased. She Appeared Before Them And Spoke.

13.17 Thereupon the king chose a kingdom imperishable even in another lifetime and also his own kingdom here, to be reclaimed by force from his enemies’ control.

13.18 And then the wise merchant, dispassionate in mind, chose that knowledge which severs attachment from “I” and “mine.”

13.21 When your enemies are slain, thenceforth it will assuredly be yours.

13.22 And after your death you will obtain another birth from the sun god Vivasvat.

13.23 Dwelling on earth, you will become the lord of the age, the manu named Sāvarṇi.

13.25 that do I grant you. The knowledge that leads to final liberation shall be yours.”

13.27 When She had given each his desired boon, The Devī, lovingly praised by both of them, vanished at once.

13.28 Thus, having received The Devī’s Boon, Suratha, the best of sovereigns will obtain birth from the sun god and will become the manu named Sāvarṇi,

The Devīmāhātmya of seven hundred verses is concluded.

READ INTERPRETATION of this Chapter
Chapter 12: The Promise of Blessings