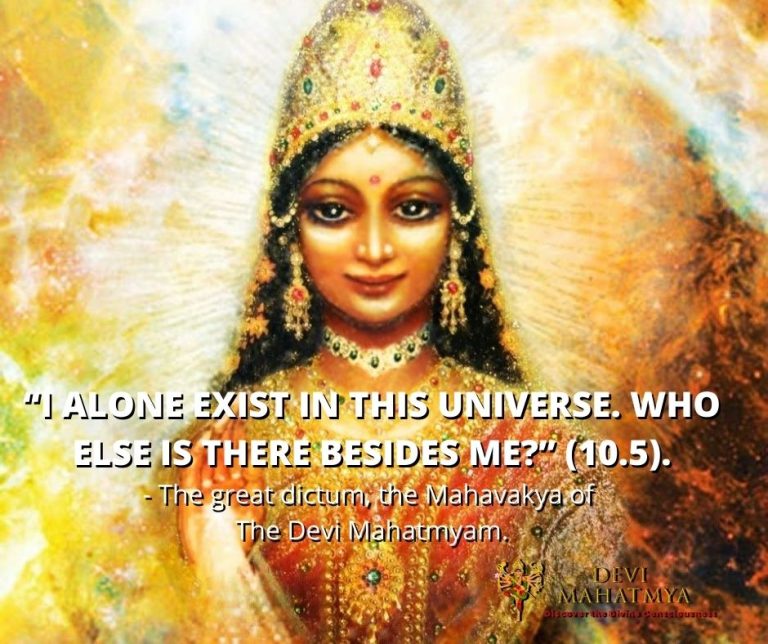 Perplexed by the multiple names invoked to refer to The Goddess- Devi, Chandika, Ambika, Kali, Ma Chamunda, Brahmani, Maheshwari, Kaumari, Vaishnavi, Varahi, Narasimhi, Aindri and a host of Other Names throughout The Devi Mahatmy, one might possibly forget that there Is Only One Goddess in the entire narrative.

The Devi Reveals She Is One without a second, saying

This is the great dictum, the Mahavakya of The Devi Mahatmyam.

Following this proclamation of Divine Unity, She Affirms that The Many Manifestations, are but Projections of Her Own Power, as are all Other Forms She Inhabits (10. 8).

The truth of Infinite Being and Oneness cannot be appreciated by the false self, for how can the false or individual self exist if it can realise Oneness? How can the limited notion of individuality exist alongside The Unbounded, Infinite Self? This is the Delusional Power of Mahamaya.

Just as all The Divine Manifestations Are Projections of The Goddess, all the asuras are also projections of Asmita. The climax of the Battle is between the limited self and The Supreme Self and not a battle between equals though such may appear as such.