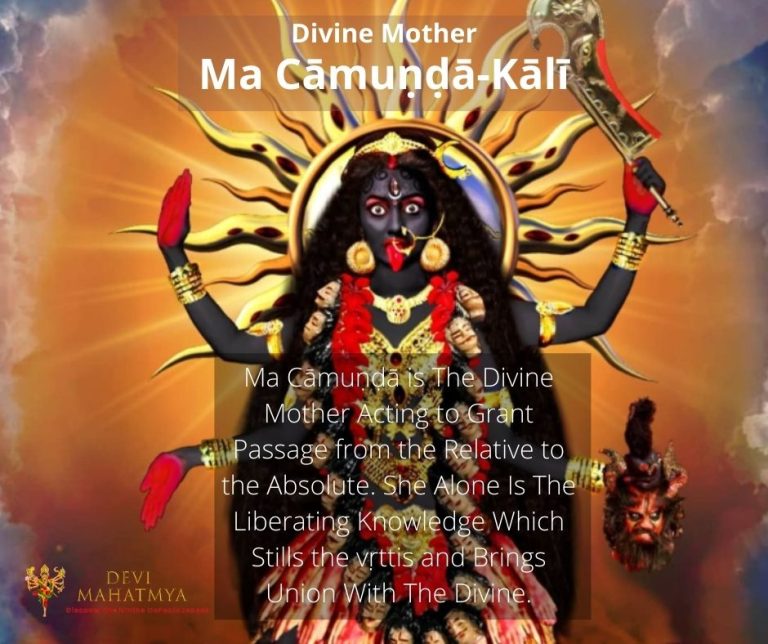 Chaturbhuja MahaKali or the Four Armed MahaKali has been best explained in the Markandeya Puran under Pradhanik Rahasyam as Part of the process of starting of life on Earth.

How life started on Earth is explained very well in ancient Indian texts.

The Energy or Force, which is behind this entire creation of Universe, Solar System and Earth is Lord Krishna’s Maya who is also the Narayani or Chaturbhuja MahaLakshmi.

MahaLakshmi then Took Another Form which was Pure and Full of Satvik Characteristics. That Form was Fair and Moon Like. MahaLakshmi Gave Her the following Names Mahavidhya, Mahavani, Bharti, Vak, Saraswati, Arya, Brahmi, Kamdhenu, Vedgarbha and Dheeshwari (Cause of All Intelligence).

MahaLakshmi Named the Man as Brahman and Woman as Lakshmi.

MahaKali Created a man with a blue mark on neck, red arms, fair body, and wearing the moon on his forehead and he became famous as Rudra, Shanker, Sthanu, Kapardi and Trilochan.

Then MahaLakshmi Submitted Saraswati to Brahman as his wife who then created this Brahmand or this universe.

She Submitted Gauri to Rudra as his wife, who together are the dissectors and destroyers of the Brahmand. In this Brahmand the entire living and non-living existence was born.

Then Lord Vishnu along with Lakshmi Sustain this existence. When the life of Universe is complete, when the time of destruction comes, Gauri and Maheshwar are the Destroyers of this universe.

So, under these three Gods we have numerous Gods or Devi, Devatas who run and manage this universe.

Above we also see that We have the creator, the sustainer and the destroyer of the universe. To understand this, we have to understand the time-line of the life of universe. This again has been stated explicitly in ancient Indian texts.