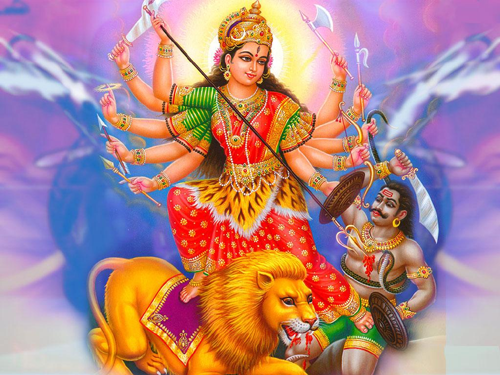 What do these two asuras denote? chanda means ‘fierce’ or ‘passionate’ while munda denotes a ‘shaved head’. Generally a shaved head is symbolic of vairagya or withdrawal. Vairagya can be true dispassion or it can also be sensitive withdrawal due to a bad experience. In the latter case it is not genuine vairagya but only withdrawal due to hurt, a negative reaction to an unpleasant experience. Here munda being an asura, denotes reactive withdrawal from things that have been a source of suffering, not genuine vairagya.

Here two specific behaviours have been selected to represent pra-vrtti and ni-vrtti, the two patterns of psychological and behavioural functioning. These two are the most common patterns of behaviour. One is hot pursuit of whatever is deemed attractive to the senses while the other is a sensitive withdrawal from those that hurt from past experience.

These are the two principle movements of ‘Asmita’ (Ego) the false sense of identity. One movement is outward exertion (pra-vrtti) while the other is inward withdrawal (ni-vrtti). Asmita reacts to external objects (be it people or material things) in one of these two manners.

If my past experience or impression of the person or object is pleasant, I pursue passionately. If it was unpleasant or hurtful, I withdraw due to hurt, or in extreme cases I may develop intense dislike or hatred for the person or object. Thus, pursuit and withdrawal are actually behavioural expressions or reactionary patterns to citta vrttis that trigger these two movements. Our responses to things or people fit into either of these patterns to varying degrees depending on the object in front of us.

This is the symbolism of chanda (Pravrtti or Extroverted Pursuit) and munda (Introverted Withdrawal).

Note: chanda and munda as Pra-vrtti and Ni-vrtti are not the same as Extraversion and Introversion. Extraversion and Introversion are psychological tendencies that are neither positive nor negative whereas the symbolism of canda and munda is related more to raga (infatuation or attachment) and dvesha (aversion or dislike), which are among the five afflicting kleshas in Yoga psychology.

Interpreting canda and munda in The Devi Mahatmya
It is canda and munda who see The Devi first and carry this news to shumbha. They tell shumbha about The Beautiful Goddess Whose Radiance Illuminates the Himalayas. They flatter shumbha with an account of his riches and powers, all stolen from the gods. Playing upon shumbha’s vanity, they suggest that he who is all-wealthy and all-powerful surely must also possess this jewel among women.

There is a misconception that pravrtti should be eschewed. At this level of sadhana, it should be realized that nothing is good or bad in itself. Even those that are deemed negative can be transformed to serve positively. This is the Shakta approach. Tantra affirms
“One must rise by that which one falls”

canda and Munda are asuric as long as they serve Asmita, the false-self.

But it is the selfsame canda and munda, the two movements of vrttis that initially turn our attention to The Devi (The Supreme Self). the same pravrtti that can pull us into bondage can initially attract us towards liberation, towards self-realisation, though initially only as another goal to be sought.

Likewise, the same nivrtti that repels us from things that can cause suffering can bring true detachment or dispassion or genuine vairagya.

As long as pravrtti and nivrtti serve the false-self (shumbha), they manifest as Raga (infatuation)and Dvesha (aversion), as canda and munda the two asuras.

As already stated, it is ‘Pravrtti-Nivrtti’ or the movement of citta vrttis that initially attracts one to self-realization, though as one more jewel to be sought. That is why chanda and munda bring news of The Devi (Supreme Self) who illuminates the Himalayas (gross body).

Parvati taking abode in the Himalayas suggests that the gross body is not an inert thing but the abode of the Self that illumines the mind-body. Even The Gods come down to the himalayas to extol The Divine Self. The mountain is not just an immovable lifeless object but the abode of The Immovable Self, The Unchanging Consciousness.
The Goddess (Self) Illumines not just the Himalayas (body) but the entire universe.
canda and munda try to tempt shumbha by telling him that there is something beyond buddhi. Though they haven’t recognised The Devi (Self) entirely, they are right in their initial impressions that She Is Unsurpassable, A Jewel Among The Best Jewels, One To Be Truly Sought. All other riches and beauties pale in comparision to The Devi (Self).
Though they are drawn to The Goddess, they haven’t yet recognised Her Divinity.
As shumbha’s inherent craving to accumulate the best of everything is kindled, he wishes to claim Her as his own, just as people often want to possess all which they find attractive and desirable. shumbha first sends the smooth talking messenger sugriva to court Her. But is it possible to realise The Self only through intelligent words? No.
But that is what people often do after acquiring some knowledge.
Mere eloquence or knowledge of the scriptures cannot bridge the gap between the Self and the false self.
The Devi Asks for nothing less than a combat between The Self (Devi) and the false-self (shumbha). Obviously, the false-self stands no chance.
He would die At Her Hands. Indirectly, The Devi Is Asking for nothing less than a sacrifice of the pseudo- self.
How can one obtain The Supreme Self without the death of the false-self? As expected, the smooth talking sugriva fails. Then he changes his tactics. He threatens to drag Her by The Hair. By sheer habit, individuals often attempt to grab even the Self by the same worldly tactics.
If smooth talking and diplomacy fail, people often resort to force!
Grabbing The Devi by The Hair is also reminiscent of people’s often initial approach to spirituality. Initially they pull the new found jewel of Divinity into the world as if it were another thing to be possessed! They see it as one more resource, like any other worldly resource.
Instead of rising to the level of The Self, people often try to pull the spiritual to the level of the material world. But none of that works!

Just as darkness cannot exist in the presence of light, a mere Humkara of The Devi is enough to Kill dhumralochana which is what happens precisely. When dhumralochana’s brute force fails, shumbha loses all reason and sends chanda and munda with a huge army to bring back “that vile Woman” in any way or in any condition whatever.

Notice how shumbha who was infatuated by “The Jewel among women” now hates “that vile Woman.” This is how raga (infatuation) and dvesha (aversion) are related to each other.

That which is very desirable today can become despicable tomorrow! This is the work of raga-dvesha, this is the work of chanda-munda! Though canda and munda initially act as afflicters, there is a possibility that one can sublimate their energies into friendly energies. Instead of serving the false self (shumbha) chanda and munda can be made to serve the Supreme Self.

But they have to be killed first, before they lose their asuric identity.

Death at the hands of Maha Kali is symbolic of transformation. Once transformed by the Fiery Power of Maha Kali they cease to be asuras. Thereafter, they are merely an expression of psychological energies, neutral energies, that take the colour of and individual’s thoughts and emotions.

It is neither pravrtti nor nivrtti that is the problem. Yoga is the restraint or stilling of citta vrttis (“yogaścittavrttinirodhal:”, Yogasutra, 1. 2). And how can we achieve this stilling of citta vrttis- only through constant practice and genuine detachment (vairagya), by constant practice (abhyasa) of non-reactivity (vairagya) (abhyāsavairāgyābhyārh tannirodhal:, Yogasutra, 1. 12).

Here is the key to the transformation of canda and munda. The power of pravrtti is channelized as abhyasa while nivrrti can become true vairagya. This is how one can kill canda and munda and transform their energies. In order to accomplish, Goddess Ambika Projects The Terrible Kali From Her Own Angry Countenance.

Maha Kali Devours the armies of demons, Falling upon them Impetuously and Slaughtering the powerful demons. Devouring some, Crushing others, Chewing Most Frightfully With Her Teeth, She Pounds the entire army of the mighty and wicked asuras.

Except for a Change Of Gender, Maha Kali is none other than Kala, who is described by Arjuna in the vision of the cosmic form in the Bhagavad Gita (11. 24-31). Lord Krishna further confirms it by affirming that He Himself is the world destroying Kala engaged in destroying the world (Kālo’smi lokak1ayakrtpravrddho lokānsamāhartumiha pravrttal:, 11. 32). Thus, Maha Kali is the same as KalMaha Kali Accomplishes Her Mission By Severing the heads of canda and munda and Delivering them to Chandika Who is none other than Ambika. Since Maha Kali brought the heads of canda and munda as battle trophies to The Auspicious Chandika, Maha Kali is henceforth Famous as Chamunda.

The destruction of chanda and munda needed The Terrible Maha Kali. But shumbha and nishumbha being more subtler spin-offs of intellect (buddhi) and ignorance (avidya), The Auspicious and Sattvic Form of The Goddess Is Needed to Liberate them. That is why Maha Kali Tells Ambika, “IN THIS SACRIFICE OF BATTLE, HERE HAVE I BROUGHT YOU THE HEADS OF CHANDA AND MUNDA THE GREAT BEASTS. SHUMBHA AND NISHUMBHA, YOU SHALL YOURSELF SLAY.” Once again we have The Goddess Talking To Herself As Both The Terrible as well as Auspicious Forms are two different aspects of The Selfsame Mother Goddess.